Robert Laidlaw, a farmer residing in the village of Bedrule in Roxburghshire (born in 1800 in Sangquhar, Dumfries, Scotland married a woman from the same village named Isabella Rutherford (born 1800 in Roxburghshire, Roxbury, Scotland) on May 21, 1826.
​
Isabella ‘Mary’ Rutherford was born in 1800 and died on Christmas Day 1872 at the age of 72. A couple years later her husband died in March 1874. Both were alleged to have been buried together in the West Bentinck Presbyterian Cemetery. Isabella was reported to be one of the first buried in the 1872 graveyard.

Children of Robert and Isabella

Bentinck Township, located near Elmwood, Ontario, is in West Grey. During the 1900s nearby Hanover, Ontario, became a popular location for German and Scottish immigrants because of the abundant wealth of farmland and hardwood forests.
The land for the cemetery was donated by the Storrar Family. The first burial, possibly Isabella Laidlaw was more likely Andrew Storrar, both died in 1872. Isabella died on Christmas Day and it is unlikely her body was buried until spring 1873.

There are 64 known gravesite plots in the cemetery, however, less than thirty percent of the gravestones remain to this day. The youngest person, of several children, buried in the cemetery is an infant under 1 years old, the oldest is 80 years old. The last burial appears to be in 1941.

The location given by several websites, including those heritage sites for cemeteries, is incorrect. The cemetery is located one half concession south of the intersection of Concession 10 and Side Road 10 approximately one concession east of the village of Elmwood, Ontario.
​
The road does not receive winter maintenance and is prone to flooding in spots following rainstorms. It is best to travel in the driest months of July and August. The road is track bare gravel and 4WD is a preferred option, low riding vehicles are not recommended with the twisting turns and hills. The recommended top speed is under 30kmh due to the risk of oncoming vehicles. 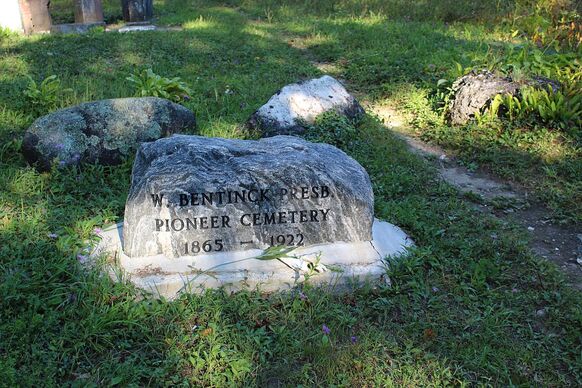 Listen Here
MYTH
Isabella grew up to be a childless old maid who was duped at the alter by her fiancé who had taken her virginity the night before the wedding. Isabella committed suicide by hanging herself while in her wedding dress on her wedding day at the age of 26.

FACTS
At least three children (seven total) have been directly connected to Isabella, their names were Walter, Jean and Robert.
She was married, successfully, to Robert in 1826.

MYTH
Locals claimed she was a witch and so her head was decapitated from her body and both buried separately in the cemetery. Her grave(s) being placed separately from the rest of the group for this reason.

FACTS
There is no prevailing evidence to prove she was a witch or practised witchcraft. The “practise” of witchcraft was, in many communities, misconstrued to include everything from botany to herbology to astrology. A well tended gardener who took heed of the seasons and Mother Nature and respected both could be interpreted as practising a type of witchcraft. A confirmed witch would not have been permitted burial on consecrated grounds nor had the symbol of a handshake (a welcoming into the heavenly world) engraved on their gravestone. Both Robert and Isabella have the same symbol on their gravestones.

There are some interesting points to be made about her burial.
A clarification to what you may have read on websites like geocaching.com, the “clustering” of gravestones was not common practise in cemeteries when they were established or for centuries following. This clustering most likely occurred some time between 1950 to 1990 when this desecration of historical cemeteries, in the name of easy maintenance and alleged vandalism prevention, was performed. It was cheaper than requesting additional police patrols or better lighting. You will not find any untouched cemeteries containing a clustering of gravestones, even the most remote locations deep in forests and the back forty of family farms.

Kevin, Lead Investigator Notes: I know this for a fact because I personally witnessed the clustering of at least a half dozen local cemeteries during the 1980s for these reasons. Stones were being vandalized by drunken idiots and it was thought the only way to protect them was to cluster them closer together restricting access. Since then we have come up with better concrete and steel supports to protect and preserve freestanding stones, too late for the cemeteries already converted. In older cemeteries where records are lost, and stones have been vandalized the clustering of stones together was done out of a lack of information more than common practise. For example, no one wants to place to stone belonging to Mary on top of the grave belonging to John lest they be haunted by the dead or the descendants thereof.

MYTH
Anyone who touches the gravestone of Isabella ‘Mary’ Rutherford will befall an injury. Allegedly the ghost of Mary will reach out from the grave and break the arm of the daring individual. The bone may not break right away but will soon after in a mysterious freak accident.

FACTS
Obviously false without a need for much explanation. Many people have touched her gravestone and not become injured including our Lead investigator Kevin.

MYTH
If you wait near the gravestone or grave, unclear which, at the stroke of midnight it is alleged that the ghost, apparition in mist form, or the witch herself can be seen walking through the cemetery near the trees.

FACTS
No one sober has reported seeing this phenomenon that we have found during our research. Due to the conditions of the road back to the cemetery and the lack of nearby public space we have not located anyone who has been back there after sunset in recent years.

Discussion on the Haunting Folklore

Is Isabella’s spirit haunting the cemetery? Not likely.
Did Isabella die an unwed childless old maid? No.
Was Isabella a witch? Unknown but evidence supports that she was not.

There has been evidence of witnesses feeling intense sorrow or discomfort while in the cemetery. This is most likely a psychological effect of hearing the rumours and legends concerning the location. However, our lead investigator, Kevin, reported that he felt a uniquely calming presence in the cemetery and noted the reduction of bird and animal sounds in the immediate area of the cemetery. He concluded, based on four visits over several years, that this was simply an anomaly of time of day and use of location versus a prevailing psychic energy in the area.

There is, however, the fact that several, albeit amateurish, rituals have been performed in the graveyard over the last several decades. Whether these rituals were the result of a impulse brought on by alcohol or intent to raise or conjure energies is too varied and undocumented to be dismissed. The toying with such dangerous activities may have created a rift or tear, a portal, allowing for the attraction or entry of inter-dimensional energies into this location. Further paranormal investigation into this location is needed.
LMP INVESTIGATION Sept 17 2020